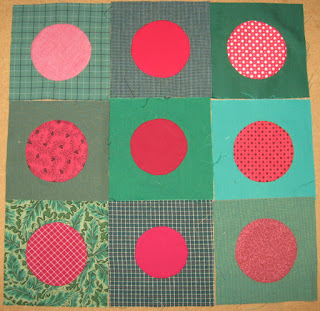 In the spring of 2013 I saw stands of roses in bloom at a garden market.  There were masses of startlingly red roses against bright and dark green leaves.  Beautiful, I thought.  Quilt idea, I thought. 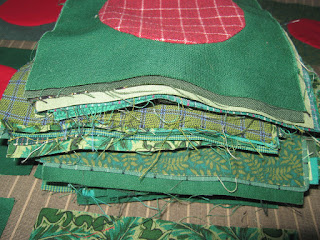 So I cut some green squares and began appliqueing red circles to them. I made a few but wasn't sure what they would become, how I would arrange them, whether I would add more to them.  I had no vision of a finished quilt.  I added a few "plus" blocks to the mix but no arrangement seemed just right and nothing else came to mind.  I put them into the closet to be revisited at a later date.

I pulled the blocks out again a few months ago to reconsider and make a decision about whether to continue or not.  And there seemed to be two voices competing in my mind.

Voice #2:  "Make more!  If you stop now you'll never know what those blocks might become.  Don't give up too soon."

I listened to the second voice and have been making more red circles on green squares.  I have more than 140 now.  (It's a casual effort when I don't have other applique to do.)  I'm still not sure what they will become, or how they will look, or even if they will become a quilt,  but I hope there will be strength in numbers.

All squares with solid sashing between  -- red or some other color, 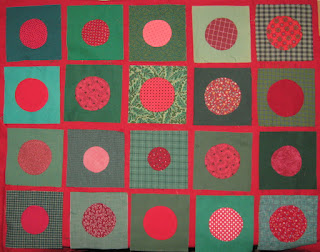 or all squares side by side without sashing? 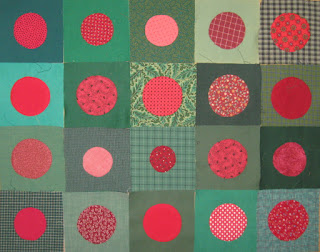 Or in groups of nine with a muted sashing, or without sashing as in first photo above? 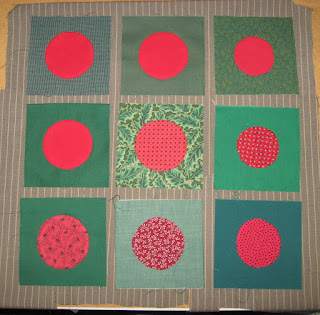 Or in groups of nine with muted sashing and red cornerstones between? 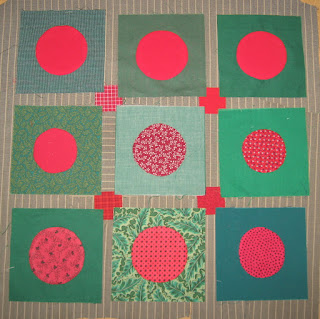 Here the blocks are placed randomly in loose groups of 9.  This layout doesn't do much for me but perhaps it's because there's no sashing.  Or perhaps it looks a jumble because there are several different greens and more than a few different reds. 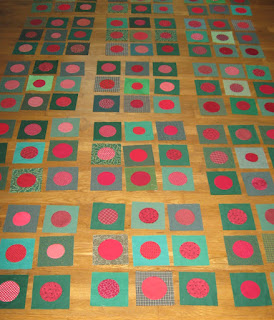 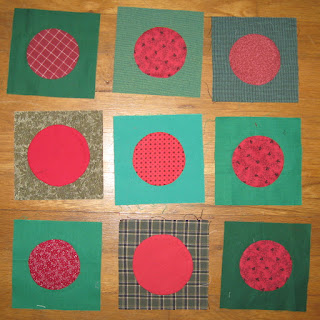 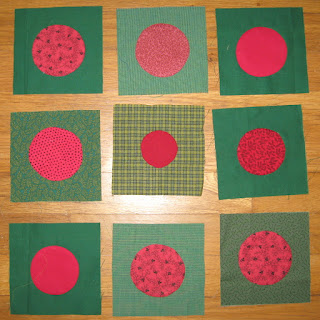 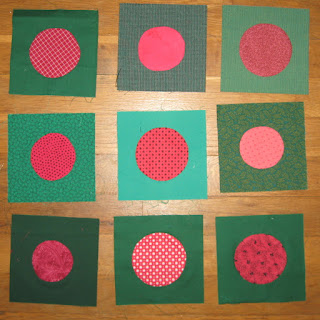 Or groups of nine with red and white striped sashing? 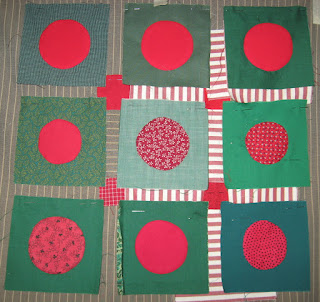 Or...?  These blocks were a crazy, impulsive choice without a clear vision of any kind.

I know most people post progress photos when they've finally figured out what they're doing, which makes this a strange kind of post, a nitty-gritty post about process and progress or lack thereof for an uncertain group of blocks.

Having listened to the second voice suggesting I make more of these, I'm going to stop stitching more (except for the ones already prepared) until I come up with a plan for a quilt!

Did I mention that these blocks will finish at 4½" square.  A group of nine with 1" sashing would finish at 15½".

All thoughts, ideas, suggestions are welcome, including "ditch them" and "Whatever were you thinking?!"  And I'm grateful for honesty, gently written.

Email ThisBlogThis!Share to TwitterShare to FacebookShare to Pinterest
Labels: red circles on green 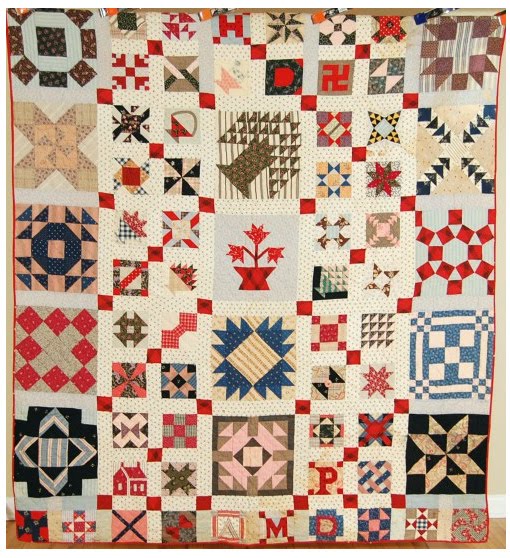 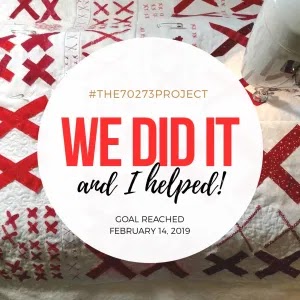